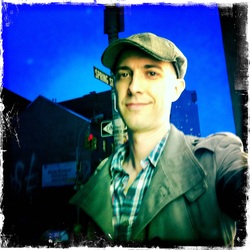 Hey there.  Thanks for checking out my site.  I’m a New York-based editor and filmmaker.  Here's a nifty third-person bio about me:
​
Jamie Kirkpatrick’s true passion for editing began the day he was allowed to sit in on an editing session with Steven Spielberg and witnessed how the director was able to re-structure a mediocre dialogue scene into a laugh-out-loud moment in the film.

​After 18 years in the industry Jamie has built up a diverse filmography, including Dave Chappelle’s Block Party, Lost in Translation, The Inevitable Defeat of Mister & Pete (one of Michelle Obama's favorite films - Google it.) and the critically acclaimed indie hit, My Friend Dahmer.
Recent editing credits include We Summon the Darkness, the historical drama The 24th directed by Academy Award winner Kevin Willmott and John Leguizamo's directorial debut Critical Thinking.

His enthusiasm for cinematic storytelling is matched only by his dedication to the craft of film editing, his encyclopedic knowledge of the works of Krzysztof Kieslowski and his well-documented weakness for a good doughnut.  He has also worked extensively in network television and commercials and has directed two short films; The Regular, available via IndiePix Films and Squeeze, which continues to win awards on the film festival circuit.